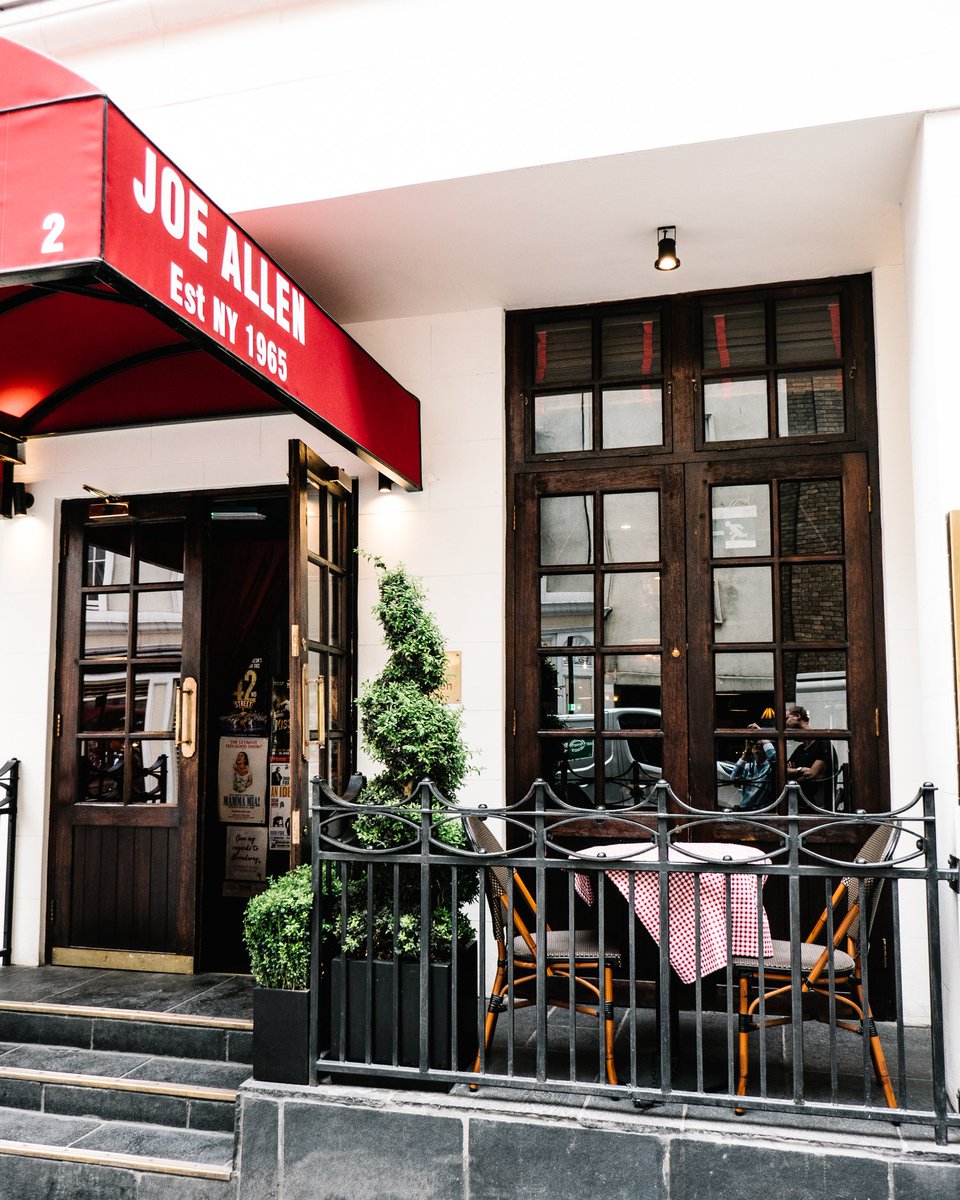 What better way to celebrate Kenny’s birthday than to raise a glass to him! KenenthMore.com is proud to have worked with the famous theatreland restaurant, Joe Allen in creating a Kenneth More table, featuring pictures from his career and two from Kenny’s personal collection; meeting the Queen Mother, and separately Prince Charles at the Battle of Britain premiere.

Joe Allen in Covent Garden was first opened in 1977, a sister restaurant to the original New York site. It was named after its owner and creator, a man dedicated to delivering fantastic dining experiences. Set in a venue adorned with the best theatre memorabilia, Joe Allen is the Covent Garden Brasserie for theatre-goers, locals and visitors alike.

Because it was started by actors, producers and directors looking to woo the West End’s latest and greatest productions, Joe Allen quickly became known as the ‘West End’s Canteen’, with famous faces from all industries often spotted among the posters.

Kenny’s daughter Sarah More recalled being taken there by her father back in the day, so the introduction of a table featuring pictures displayed in his memory makes this table extra special to dine at.

To mark Kenny’s birthday on September 20th, we are extremely pleased to welcome acclaimed actor of stage and screen, Ronald Pickup, to shares his fond memories of working with Kenny, on the Father Brown episode, The Eye of Apollo.

“I remember being high up on this balcony in Finsbury Square doing this weird scene at the start of that episode…I was supposed to be preaching to the public as this leader of a bogus religious cult….a sun worshipper.

For me though, working with Kenny was just such a joy. He was one of my generation’s favourites…and there was something completely seamless from the personality I knew of on screen from both cinema and television, to the one I worked with…

I had met him previously working on TV series, The Dragon’s Opponent where Angela Douglas was working with me on one of the episodes. I remember him coming to the set and taking us all out for dinner. He was very generous and sweet like that…When I met him again on Father Brown, he was very jovial, easy, and just so relaxed behind the camera…. A natural performer and an education watching him act. To be in a series of Father Brown was great too, having known of GK Chesterton’s books since I was a boy.

Kenny though as Father brown was just great. I was lucky to work with him. But I think he was more versatile than people think. I remember seeing him in the film version of The Deep Blue Sea. He was excellent and his performance is very unapologetic. The dark side of him was wonderful to see, especially for someone so popular – I think that character was more of a risk to to do than people would think of now.”

Our founder’s hero, is of course Kenny, but Nick Pourgourides was keen to know who Ronald Pickup held in the same regard. I had many heroes in our business, including Kenny, but my biggest had to be Laurence Olivier!”

Funnily enough, Kenny held him in the same regard! Order the Father Brown box set here

With special thanks to Ronald Pickup

Our founder, Nick Pourgourides, was a guest on BBC Radio London with presenter Jason Solomons to talk all things Kenneth More. Nick brought along Kenny’s 40th anniversary Variety Club silver heart to help remind the public of his immense contribution to the entertainment industry.

With thanks to Jason Solomons.

KenenthMore.com is proud to have worked with London’s famous Duchess Theatre in putting together a special commemorative plaque to mark Kenny’s seminal work in  Terence Rattigan’s The Deep Blue Sea.

This week our founder, Nick Pourgourides, opens up the archives to examine some of Kenneth More’s personal items. A framed photograph from the set of A Night to Remember is the subject. With thanks to Talking Pictures. This interview except originally aired as part of Kenneth More Day

A different side to Kenneth More…

Our Founder, Nick Pourgourides, tells how surprised he was to learn how quiet Kenny was at home. With thanks to Talking Pictures TV. The interview originally aired as part of Kenneth More Day.

This week our founder, Nick Pourgourides, opens up the archives to examine some of Kenneth More’s personal items. The first of which is a silver heart award from 1955, bestowed by the Variety Club of Great Britain.

40 years later the award would reappear at a Variety Club lunch in the Lancaster Ballroom of the Savoy to celebrate Kenny’s 40 years of show business, for which he received another silver heart in special recognition.

Kenny and wife Mabel and daughter Sarah on holiday in the 1950s. Image courtesy of Sarah Glaister

Kenneth More with daughter Sarah, on the set of The Admirable Crichton.Image courtesy of Sarah Glaister

Kenneth More with daughter Sarah and wife Mabel (Billie) Barkby, on the set of Reach for the Sky. Image courtesy of Sarah Glaister

Kenneth More with daughter Sarah and wife Mabel (Billie) Barkby, on the set of The Admirable Crichton. Image courtesy of Sarah Glaister

Kenneth More and daughter Sarah at the family home in Wargrave. Image courtesy of Sarah Glaister

Kenneth More with daughter Sarah doing the twist on board a US battleship on the set of We Joined the Navy. Image courtesy of Sarah Glaister

“I am so proud to be the daughter of Kenneth More and I am also so grateful for Nick Pourgourides for promoting my father through KennethMore.com and helping Talking Pictures TV with a day in his honour on July 12th”

“Kenny is always remembered with warm happy memories of love…A Kenneth More Day is something very special to me…. A time for us all to think of him with great affection. With thanks to Talking Pictures but especially to my friend Nick Pourgourides, for all that he has done and continues to do in keeping his memory alive.

“Only a year ago, I was saddened to see how little presence there was for man who had given so much to the British entertainment industry and the public, over four consecutive decades. A year on, things are changing. Most importantly we have an official website, social media channels spreading the word, and press coverage building. July 12th has always been a poignant date, but at least this year it marks something positive, with Talking Pictures TV dedicating a whole day’s worth of programming in his honour. I’ve been filled with joy in meeting and receiving so many messages from people who are as fond of Kenny as I am. There’s still more to do in reminding people of his great career and there are some exciting plans afoot. Let’s keep on keeping on!”

With Kenneth More Day almost upon us we delve into the Preservation Library to examine a rare item.

Angela More: “Actors makeup boxes are very personal items. Kenny always applied his own before performances. He kept it at home in his final years. To think that the last time these paints were used was by him makes it extra special to me. The cork is something actors used to apply makeup with. His was from a vintage 1943 Veuve Clicquot Champagne bottle. I never asked him what the significance of it was but assume it was from some victory at sea during the war.”

Actor Kenneth More in a scene from “The Sweet War Man”, 1965 (Photo by Popperfoto via Getty Images/Getty Images)

Angela More: “He loved collecting watches, clocks, basically anything that ticked! In the picture above, that was a Rolex Submariner. I remember that one on his wrist. He had a good number of timepieces. Rolex, Cartier, Piaget…”

Angela More: “In our home at Bute House I remember an antique Grandfather clock, a chronometer in a box in his study, a carriage clock on his desk…. Come to think of it, they were all over the house! It’s fair to say he was a bit of a collector.”

Kenny’s daughter Sarah More remembers his Piaget watch (above). “It was one my mother gave him as a present. He kept it all throughout his life. What amazed me was how paper thin it was. I still have it.”

Angela More on the story behind his Rolex DateJust: “We were in the South of France on holiday once and I sent him out to get some breakfast. He took rather a long time in returning and when he did this watch appeared. ‘You’ve completely forgotten about the food!’ I said. Seemed he had more interest in the local jewellers than the bakery!”

Godson Michael Porter remembers his love of watches too. “I remember he had a Bulova Accutron. It used a resonating tuning form to keep time….He had an unusual wrist watch he was very fond of, a half hunter. I have never seen one like it, before or since.”

Kenneth More interviewed about his autobiography, ‘More or Less’, on Thames Television

Kenny relaxing on holiday in the 1950s. Image courtesy of Sarah Glaister

Kenny and wife Mabel and daughter Sarah on holiday in the 1950s. Image courtesy of Sarah Glaister

Kenneth More on board HMS Aurora docked at Naples in 1943. Image courtesy of the family estate

Kenneth More giving Angela breakfast in bed at the Plaza Hotel in New York. 1966. ‘There was an awful lot of food in our marriage.’ Angela More. Credit Angela More

Kenny and Sarah o holiday in the 1950s. Image courtesy of Sarah Glaister

Kenneth More and Angela Douglas holidaying in St Tropez in 1969. Pictured here with a new friend they found on the beach. They nicknamed him ‘M’Lord’. Image courtesy of Angela More

Lieutenant Kenneth More RNVR (far right with telescope in hand) aboard HMS Aurora, whilst docked in Naples in 1944. Image courtesy of the family estate

Father and daughter. Kenneth More and Sarah having fun on the Swiss Alps during the 1950s. Image courtesy of Sarah Glaister

Kenneth More in the kitchen at Rumbold Road. Image courtesy of Angela More

Kenny on board HMS Victorious, running the brains’ trust on the internal broadcasting system. The Pacific 1945. Image courtesy of the family estate

Kenny and wife Mabel with unidentified friend, holidaying in the 1950s. Image courtesy of Sarah Glaister

Kenneth More and friend on holiday in the 1950s with daughter Sarah in the background. Image courtesy of Sarah Glaister

Kenny and wife Mabel holidaying in the 1950s. Image courtesy of Sarah Glaister

Kenneth More on set for his last film performance as Jarvis Lorry in ‘A Tale of Two Cities’. Photograph courtesy of Angela More

Kenneth More (3rd from left in 2nd row) in the Windmill Theatre Football Team, 1935. Image courtesy of the family estate